I’ve been using bitnami-redmine, which is so called all-in-one Issue tracking system(ITS). I mean it contains the Apache Web Server, Mysql, Subversion, Redmine itself. You don’t need to install additional software and you can use it immediately if you use Subversion as the versioning system.
In my case, I use git on gitBucket(a kind of gitHub clone), so I installed WebHook plugin and sending WebHook-signal from gitBucket. It can connect deeply to git by containing commit-comment like ‘refs #ticket-id’.
The WebHook also connects Jenkins in order to build and test for an VisualStudio Solution.

The image is below. 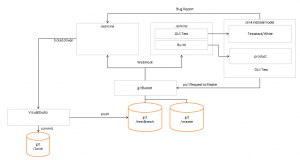 The all above tools mainly target for Java development.
However I think they are more productive for even .net development than TFS.